members
entry of the
smartencity
network

Municipal and National Youth Climate Councils is a recent phenomenon, established on the momentum created by Fridays For Future and a strong demand for action among the younger generation becoming increasingly aware that the clock is ticking. Sonderborg Youth Council decided to establish a group for and by young people focused on climate and environmental issues, creating activities, informing and engaging their peers and the citizens of Sonderborg.

Soon after the establishment, Sonderborg YCC got attached to the Erasmus+ project, ‘EYES’ – ‘Engaging Youth in Sustainable Energy Planning’. The aim of the EYES-project is to strengthen youth participation and youth involvement in the planning of sustainable local communities through a dialogue- and learning-based process. The learnings and experiences gathered throughout the project will help build an understanding of how to best include youth in local climate and energy planning processes. Engaged youth from six European countries in Sonderborg – Denmark, Lyon – France, Napoli – Italy, Cieszyn – Poland, Varna – Bulgaria, Granollers – Spain, have joined a Youth Intervention Team (YIT) to act together with their local community.

In Sonderborg, a total of 14 members between the age of 15 to 25 have joined the YCC. Many of the members have recently gained an interest in climate change and view the YCC as an opportunity to take responsibility, learn and engage friends and family. Others started out as activists, organizing local climate strikes and became a member because they saw an opportunity to strengthen the young voice in Sonderborg and possibly gain influence on local climate and energy policies. The youth are assisted by an Advisory Board composed of local professionals: the local climate coordinator in Sonderborg, a city councillor, entrepreneurs, a youth coordinator, an engineering professor, etc. helping with activities and generating ideas, assisting with contacts and introducing the youth to their world.

The relationship between the Advisory Board members and the YCC has proved valuable to both parties. Due to the close contact with the climate office in Sonderborg Municipality, the YCC has been asked on several occasions to come up with ideas for projects in the Municipality. Recently the climate coordinator asked the YCC for ideas regarding at a new center curating activities about the Sustainable Development Goals and has also asked the youth to come up with initiatives involving youth for the new climate and energy plan in Sonderborg Municipality.

The YCC is also hosting their own events and activities. To mention one example, hosting a clothing market in December focusing on recycling and upcycling and in parallel running a SoMe campaign about sustainable Christmas.

In January the YCC launched a survey asking youth between the age of 15-29 years in the Sonderborg area about their relation to climate, environmental and sustainability issues. The survey will be analyzed and presented in a report and conclusions and recommendations will be presented to the city council in Sonderborg and in international contexts as a part of the EYES-project.

The survey was more specifically tailored around the words: worries, barriers and motivation. For example, asking about climate change worries globally and locally, knowledge on local climate initiatives, seeking information about climate change, which initiatives or areas the Municipality should focus on, why it can be hard to engage with these issues and how the Municipality should encourage youth engagement.
So far, the YCC has collected 506 answers, already preceding the original goal of 400. Although the process of collecting more answers has slowed down due to COVID-19 the YCC is still eager to gather more responses making shore to reach a number high enough to represent the age group. 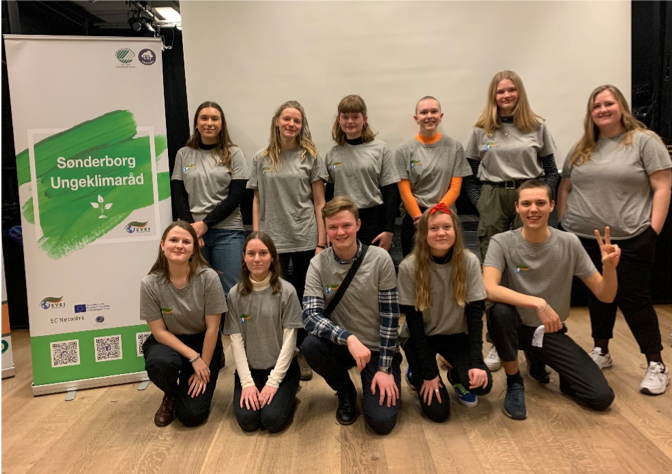 Sonderborg Youth Climate at the launch of their survey, January 30th, 2020.

What does the survey say?

Asking the respondents how often they seek out information on climate, environmental and sustainability issues. Around 10% states that they seek out information on these issues very often and the majority with 53 % states that they sometimes seek out information. A more interesting question is on what platforms the respondents are searching for information. Not surprisingly the majority with 74 % answered that they use social media as their main source. The second highest was the news: newspapers, news apps and tv news at 68 %. Only 5% stated that they use the Municipality as a source. A recommendation on how to further engage the youth will be given in the report of the survey which will help the Municipality to reach the youth better when communicating about climate change. This will also help the Municipality to spread knowledge on the initiatives they implement to combat climate issues and raise awareness among the youth.

When asked if they want the possibility to involve themselves with the local climate and energy planning process, 65 % states that, yes, they would like the possibility of becoming more involved. But when asked how they would like to become involved, the majority answers that they don’t know or don’t have any suggestions. Here is also an opportunity for the Municipality to create more channels or platforms for the youth to involve themselves. It is again important that both the Municipality and Sonderborg YCC creates a strong message showcasing how youth can involve themselves with climate issues in Sonderborg.

1 day ago - RT @alisdaniela: The importance of a city baseline analysis to define ans structure #smartcity solutions is key to assess the impact. Tomor…
1 day ago - RT @matchupEU: Do you remind our #CityFromMyWindow campaign? It was so fun and so restorative to see all your pics! We want to thank all pa…
2 days ago - We are getting started with Lesson 3 of the #SmartEnCityAcademy in about 15 minutes! Join us now by registering to receive the link: https://t.co/mvW4w59Tu0 See you all in a bit :) https://t.co/yTea1kjSzq